Iraq: Targeting Media Institutions In Baghdad Is Alarming And Journalists Must Be Protected 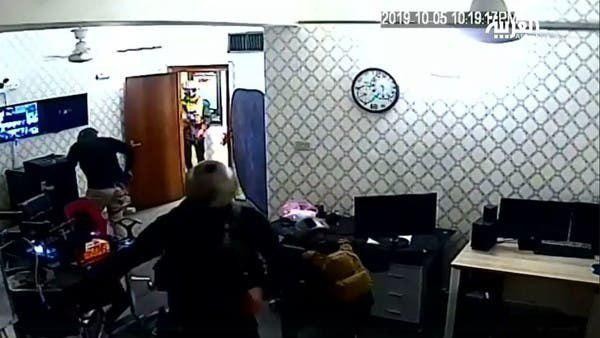 MADRID: – Skyline International denounces the attacks on the headquarters of Iraqi and Arab media channels in the Iraqi capital Baghdad on the background of its news coverage of demonstrations and current events.
According to testimonies reaching “Skyline International”, gunmen burned the headquarters of the channel “Dijlah ” satellite, which led to the suspension of broadcasting.

Other gunmen stormed the headquarters of the channel NRT and destroyed the contents assaulting its staff.
The local Al-Furat channel announced that its office in central Baghdad was hit by a mortar missile attack by gunmen, injuring one of the workers.
There were other attacks on the offices of “Arab” and “Hadath” channels, two press centers, and on the office of a broadcasting company contracted with several Arab and foreign channels.
Al-Arabiya correspondent in Baghdad reported that the office had received threats before the raid. He said that about 10 masked people wearing black uniforms, drove black cars and stormed the main entrance.

They assaulted the cadre in the office of the channel, beat the staff with weapons, and then broke down portable equipment.

Attacks on press offices are a serious escalation against the press through the use of weapons and physical attacks; benefiting from the situation in Iraq, in the wake of the ongoing popular demonstrations days ago.
The organization states that there are people who are trying to prevent media coverage and expose violations against the demonstrators.
Attacks against the press are coordinated and are an attempt to prevent press coverage of horrific human rights violations, Skyline said.

Skyline International is following the attacks against the press with great concern, especially as they came days after the disconnection of Internet services and the blockage of social media sites from all over Iraq. The organization stresses that these attacks come in the context of blocking information about Iraqi citizens from the international community.

Iraq ranks 156th in the 180-nation list of the 2019 press freedom index, despite that Iraq lacks laws that protect journalists’ rights and provide them with necessary immunity.

Skyline International urges the Iraqi authorities to protect journalists and all media workers of all affiliations and to prevent attacks on them, indicating that the government bears full responsibility for their safety and security.