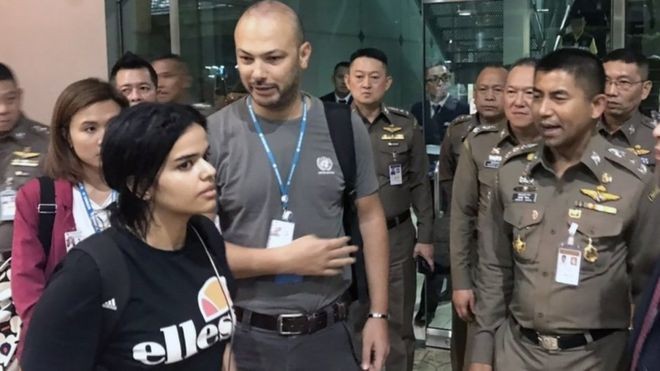 Skyline International said that Shuaibi’s claim to Thai authorities to confiscate Rahaf’s mobile device because of her Twitter writing was out of the law.

The Saudi ambassador in Thailand appeared in a video demanding Thai police to withdraw her mobile on the pretext that her Twitter account has received more than 45,000 followers. “I wish they confiscated her mobile, rather than her passport”, he added.

Skyline International confirmed that the demands of the Saudi ambassador were a clear disregard for freedom of expression in the world and an attempt to stop the wave of solidarity that began to spread with the case of Rahaf al-Qunun, who has a visa to Australia, but was detained at Bangkok airport depending on the request of the Saudi authorities.

Thai and Saudi authorities are held responsible for Qanoun’s life and safety. Skyline International demanded that she should be allowed to travel to Australia immediately.

Skyline also asked the United Nations High Commissioner for Refugees (UNHCR) to intervene strongly to prevent the deportation and handing over of Rahaf to the Saudi authorities, and to allow her to travel to the destination in her visa.

The International Foundation also said that Saudi Arabia’s official and diplomatic alertness for the case of a girl under the age of 18 was found in foreign territory highlights the violations against the dissenting opinion holders and the particular case of Gamal Khashoggi, who was killed hidden in Turkey.