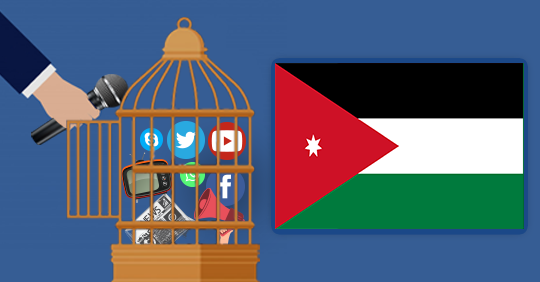 In a statement, the Stockholm-based international foundation states that Jordan deliberately shut down some social media services, including video broadcasting and display.

Skyline points out that these actions coincide with the Jordanian teachers protests that have been going on for several days in the capital, Amman, in order to blackout these protests and prevent spreading information and news.

Facebook Live servers have been blocked in numerous internet companies in the Kingdom, which restricts activists from broadcasting videos related to the happening incidents.

Skyline confirms that this Jordanian measure seriously violates and contradicts Article (19) of the Universal Declaration of Human Rights, which Jordan considers to be signatory. The article stipulates that "Every person has the right to enjoy freedom of opinion and expression; this right includes freedom to hold opinions without interference and to seek, receive and impart information and ideas through any media and regardless of frontiers".

The International Human Rights Foundation stresses that restricting the Internet reflects a repressive regime that does not accept different opinions and violates public freedoms and the right to access information.

In this regard, Skyline warns of the Jordanian authorities massive actions to muzzle dissent voices and restrict the media and the freedom to share information. It also calls Jordan for fulfilling its obligations regarding freedom of opinion and expression and the right to access information.