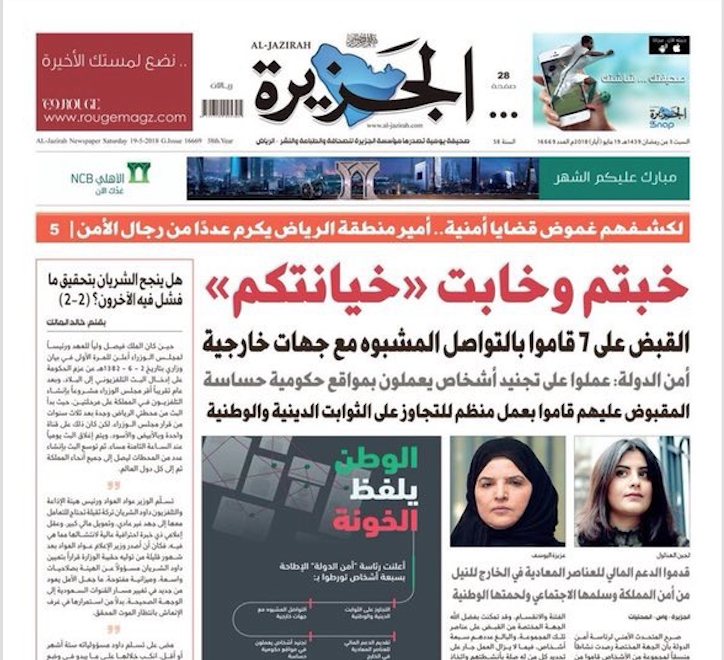 The Skyline International Foundation on Saturday (May 19th, 2018) denounced the defamation and accusations of treason that human rights activists detainees were exposed to in Saudi Arabia.

The Stockholm-based foundation said that it observed a great defamation from semi-official Saudi newspapers and social media accounts.

The foundation added that the defalcation peaked after publishing photos of male and female detainees on which the word traitor was written. This is a serious accusation that will have a negative impact on the life of the detainees.

The SkyLine international foundation affirmed that the Saudi authorities record is black and does not guarantee a just trial for any detainees. This is a blatant example of human right and freedom speech violations in the kingdom that it is supposed.

The Saudi authorities launched a campaign of arrests on the first day of Ramadan against a number of human rights activists, including Dr. Muhammad Al-Rabeea, Dr. Ibrahim Al-Mudemigh, Abdul Aziz Al-Mashal. Other women rights activists were arrested including Loujain al-Hathloul, Aziza al-Yousef and Eman al-Nafjan, who have long opposed a driving ban on women in the kingdom.

The International Skyline Foundation confirmed that the Saudi authorities have a black record of trials and does not guarantee a fair trial for any of the detainees, which is a clear instance of human rights abuses and freedom of expression in the kingdom, which is supposed to lead major reforms from its young crown prince, Prince Mohammed bin Salman.

The Swedish Foundation said that the series of new arrests and incitement of detainees is a continuation of the previous approach followed since 2011, where scores of arrests have been carried out for many years including dozens of preachers who were arrested against the backdrop of the Gulf crisis. They were not brought to the courts or even allow their parents to Visit them.

Saudi Arabia is one of the countries with the lowest levels of freedom of expression in the world. It has a black record of abusive arrests, executions and long prison terms without trial, which has been criticized by international organizations.

Saudi authorities have launched more than 2305 arrests over the past six months to interrogate in corruption charges as the authorities said.

International organizations such as Human Rights Watch said they had arrested 5314, 3380 of them have spent more than 6 months without trial, 2949 one has spent more than a year in detention, and 770 more than three years.

The International Skyline confirmed in its statement that the international community must intervene to pressure the Saudi authorities to release prisoners of freedom of expression from Saudi prisons and end the illegitimate detention policy pursued by the authorities for years without any disapproval from Western allies.