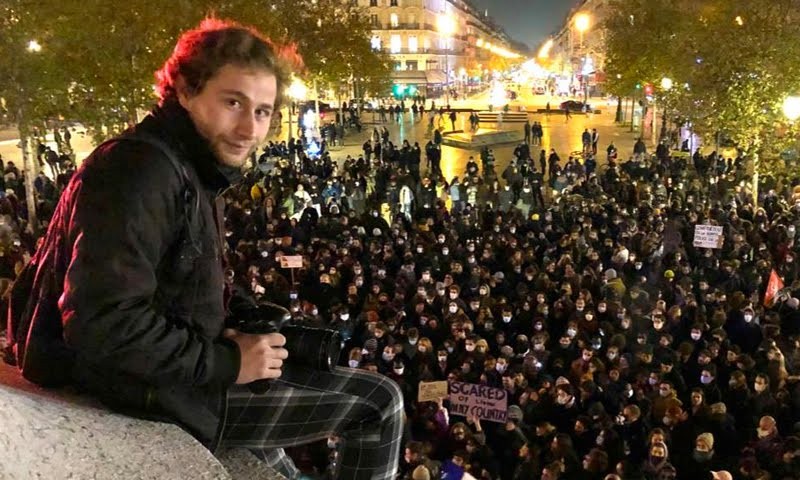 STOCKHOLM - Skyline International condemns the assault of a Syrian photojournalist by the French police while covering street protests in Paris.

In a press release, Skyline states that the French police violently assaulted Syrian photojournalist Ameer Al-Halabi during a protest at Place de la Bastille against the "comprehensive security" law and police brutality in Paris on Saturday.

Ameer Alhalbi (24 years), is a freelance photojournalist who worked for Polka Magazine and AFP, was abusively beaten with a baton in his face. This action gravely violates the freedom of the press.

Skyline followed up by publishing photos of Al-Halabi on a hospital bed. His face appears bruised, with much of his head covered in bandages and his nose bleeding as he had suffered a broken nose due to the police's baton attack.

Al-Halabi, who has won many international awards, including the second prize in the "Spot News" category for the "World Press Photo" in 2017, covered devastation and conflict incidents in his city Aleppo for the AFP.

Skyline International calls on the French authorities to open an investigation into the assault taken against Al-Halabi to hold the perpetrators responsible and to take adequate measures to guarantee freedom of work for journalists of all affiliations.

Also, Skyline affirms that the French authorities must abide by the Universal Declaration of Human Rights to take appropriate steps to prevent violence, threats, and attacks against journalists and media professionals and ensure accountability for all forms of attacks against them.