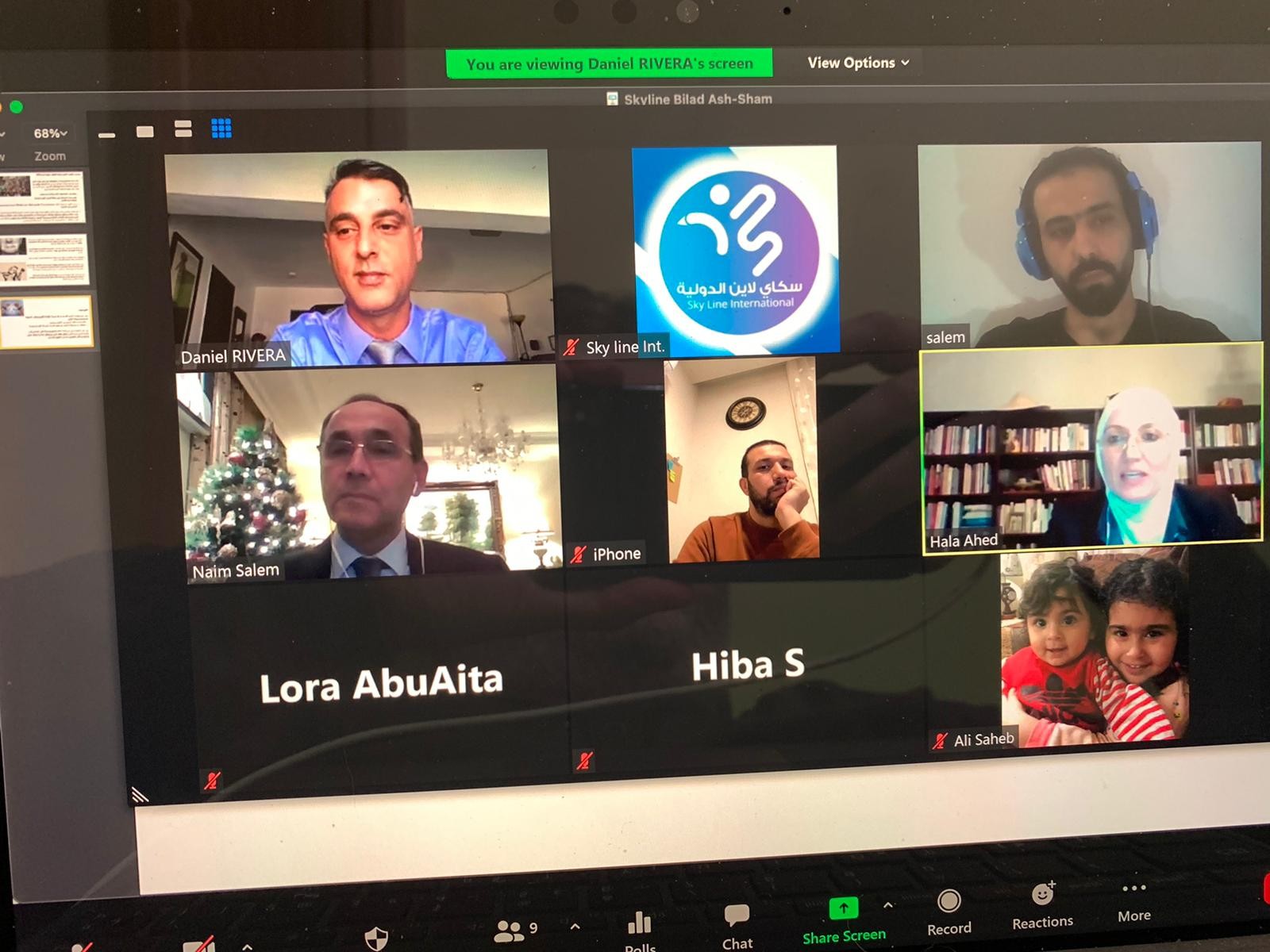 The Skyline Foundation had the honor to host a new conference within the series Freedom of expression in the MENA region, featuring leading experts, academics, and activists in Bilad Ash-sham. The foundation invited these experts to speak about the main obstacles and challenges halting freedom of speech in their countries. The conference took place online on the 15th of December and simultaneously in different cities: Amman, Beirut, Iraq, Jordan, Madrid, Miami, Palestine, and Syria.

The conference Freedom of Expression in Bilad Ash-Sham, democracy, sectarization, and violence, had the goal to introduce the audience to the obstacles, limitations, and challenges human rights activists and journalists face in each country in this region. Halla Ahed, a human rights lawyer, labor and women’s rights expert in Jordan, Salem Mudallala, Syrian journalist, and activists. Dr. Naim Salem, Lebanese professor in international relations and diplomacy, Isam Abdeen, head of the local and regional advocacy at al-Haq in Palestine, and Mustafa Saadoom, journalist and director of the Iraqi Observatory for Human Rights.

It is quite unusual to gather such an outstanding team of experts from the Levant, and each speaker contributed with a unique approach to the issues surrounding free speech in the Middle East. Halla Ahed talked about the evolution of freedom of speech in Jordan for the past two decades. According to her, Jordan enjoys legislation in the constitution, protecting free speech, but the wording is vague, and government officials tend to ignore these provisions.

However, she noted how the government was willing to approve news laws protecting freedom of expression. Still, after the Arab spring, the trend changed dramatically, and previous government commitments have been abandoned, especially after the increase of violence in Syria.

Salem Mudallala described the terrible situation of activists and journalists in Syria. He told the government’s tight control over communications and mobile phones and how activists and their families are subject to intimidations, threats, and harassment campaigns through state-own mobile and internet services.

He describes in detail the kind of harassment journalists and activists are suffering in the country. Also, he mentioned how popular social media sites such as Facebook or Instagram are blocked: “It is impossible to access these sites in the country,” he said during his intervention.

According to Salem, Bashar al-Assad government exercise strict control of any activities of journalist and activists. Salem also talked about the use of chemical weapons in Syria and other gross violations of human rights.

Professor Salem began his intervention by highlighting that there are only two countries with freedom of expression in the MENA region, Tunisia, and Lebanon. According to Salem, all the Middle East countries are ruled by dictatorial and authoritarian governments, and thus they exercise tight control of free speech and the spread of information.

Salem defended Lebanon’s tradition regarding freedom of expression. When asked about the unfortunate killing of several journalists such as Samir Kassir or Gibran Tueni, he blamed foreign intervention for those assassinations in 2005.

Professor Salem insisted that the deficit in free speech in Lebanon and other countries in Bilad Ash-Sham resulted from foreign pressures, foreign intervention, and proxy wars. He accused Western governments of using human rights to discredit and undermine the sovereignty of countries such as Syria and Lebanon. Finally, regarding Lebanon’s situation, he mentioned Hezbollah’s increasing role in politics and defended its position against Israeli aggressions.

However, he explained that there is often little understanding about what these rights mean, especially among security forces and the police, who ignore these rights, using force disproportionally against protestors. Another challenge facing journalist in Iraq it’s the proliferation of militias. These militias further complicate journalists’ activities who are often targeted by security forces and local militias.

These ideas are just a few of the many issues discussed during the conference.

Between interventions, participants were able to make questions and address the panel. The debate was intense and engaging among participants and successfully tackled thorny and crucial matters regarding freedom of expression in Bilad As-Sham.