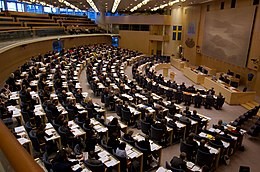 The Skyline Foundation deems absolutely necessary to bring to the attention to the Swedish Parliament and each member of the European Union the terrible situation of political activist and prisoner of conscious Ahmed Masoour in the United Arab Emirates. It essential the European Union and its members publicly condemn the hideous treatment he is receiving in detention. The health of Emirati human rights activist Ahmed Mansoor is deteriorating rapidly after more than three years in solitary confinement without basic necessities. Mansour is a member of an advisory board in both organizations: Human Rights Watch and the Gulf Center for Human Rights.

Sources with direct knowledge of Mansour's conditions of detention told Human Rights Watch and the Gulf Center for Human Rights that authorities force him to sleep on the floor without a bed or mattress in a small isolation cell. In 2019, Mansour went twice on hunger strike to demand access to prisoners' basic rights, including ending his solitary confinement and receiving essentials. His second hunger strike, which lasted about 45 days and during which he lost 11 kilograms, raised concerns for his health and sparked global calls for his immediate and unconditional release.

Emirati security forces arrested Mansour on March 20, 2017, and for more than a year prevented him from contacting a lawyer and allowed only limited visits from his family. Mansour was sentenced to 10 years in prison in May 2018 after a closed trial for insulting the "prestige and stature of the UAE and its symbols," including its leaders, over his peaceful calls for reform. On December 31, 2018, the Federal Supreme Court, the country's court of last resort in state security cases, upheld the ruling against him and nullified his last chance for early release.

Human Rights Watch and the Gulf Center for Human Rights said that UAE authorities should immediately and unconditionally release Mansoor, end his solitary confinement, and provide him with necessary medication, winter clothes, blankets, mattress, and a bed.

The Skyline foundation appeals to the parliament of Sweden to take action and to demand the release of this prisoner of consciousness. Ahmed Mansoor has been disproportionally punished for expressing his views and defending human rights in his country. It’s a tragedy that the European Union is turning a blind eye to abuses and torture outside the EU while allowing member states to promote lucrative business with the kingdom. This is against EU laws and principles