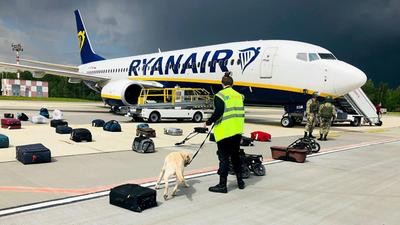 Stockholm – Skyline International for Human Rights condemns the Belarusian government for diverting a Ryanair plane from Greece to Lithuania flying over its territories to arrest a journalist and an opposition activist Roman Protasevish. He is the co-founder of Telgram channels NEXTA, an opposition channel in Belarus, who has voiced opposition to President Alexander Lukashenko’s authoritarian regime.

In its statement issued Thursday, Skyline International is deeply concerned over the detainment of Roman Protasevish by Belarus authorities on May 23, 2021. Belarus fighter jets forced the plane to land under the pretext of a bomb threat. The police then detained Roman Protasevich and his girlfriend, Sofia Sapega, who traveled with him at risk of torture and ill-treatment. According to the BBC reporting, passengers who witnessed the activist’s arrest said that he feared that he would face the death penalty as Belarus is the only European country that still executions prisoners.

According to Belarus state media, President Alexander Lukashenko personally ordered Roman Protasevich’s arrest. This decision stems from the much-disputed elections that saw Alexander Lukashenko, who has ruled the country since 1994, win the elections and has cracked down on opposition leaders and voices while many have fled into exile. Amnesty International has launched an urgent action stating, “their arrest is arbitrary and unlawful, and its circumstances are nothing short of horrifying” (Amnesty International, 2021). Roman Protasevich was put on Belarus’s terrorist list in November 2020 with charges of individuals involved in terrorist activities, incitement of mass riots, gross violations of public order, and incitement of social hatred. However, these charges are under pretenses as Amnesty International states that Roman Protasevish was only doing his journalistic work.

Skyline International indicates that the detention and prosecution of journalists are against international law, are unjustified, and violate the rules for freedom of expression and practices to journalism. As Article 19 of the Universal Declaration of Human Rights states: “Everyone shall have the right to freedom of expression; this right shall include freedom to seek, receive and impart information and ideas of all kinds, regardless of frontiers, either orally, in writing or in print, in the form of art, or through any other media of this choice.”

Skyline International calls on the Belarusian authorities to immediately release Roman Protasevich and Sofia Sapega. Belarus should urgently halt all arbitrary detention of opposition journalists and activists and release all political detainees and prisoners of conscience. Skyline International also stresses the international community and the European Union to set up an investigative commission into the incidence of the Belarusian hijacking of the Ryanair plane to prevent such violations of authority again.