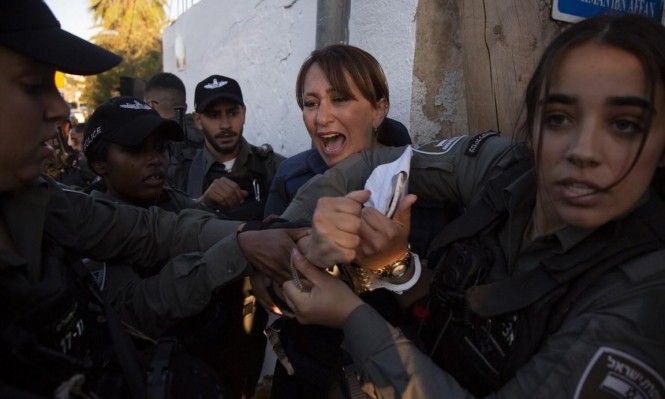 Stockholm - Skyline International for Human Rights said that the attack by an Israeli police force against Al-Jazeera correspondent," Givara Budeiri", is a clear violation of all international conventions and laws that guarantee freedom of journalism. Thus, it called upon those authorities to immediately and unconditionally release her.

In a statement issued on Saturday, Skyline expressed deep concern over the Israeli soldiers' use of violence against " Budeiri" as she was covering to the confrontations in the "Sheikh Jarrah" neighborhood in Jerusalem. Then, they arrested her, destroyed her camera, and threatened the accompanying team.

The human rights foundation ‘’Skyline’’ stated that the attack on the Palestinian journalist "Budeiri" was directly documented by the cameras by a team of journalists who were in occupied Jerusalem, to cover the demonstrations and protests that took place in conjunction with the 54th anniversary of Naksa Day; that resulted in Israel's occupation of the West Bank, the Gaza Strip, the eastern parts of Jerusalem, the Golan and Sinai.

Skyline expressed its deep concern over the escalating Israeli attacks on journalists in the Palestinian territories. The foundation documented more than 12 cases of harassment, injury and assault on journalists, including 11 cases by Israeli security forces, and one case by Israeli extremists.

Skyline indicated that the Israeli forces 'attack on the press included confiscating journalists’ equipment and restricting them from moving in the demonstrations areas in order to prevent them from conveying the reality.

"Skyline" called on the Israeli authorities to immediately release "Budeiri" and the rest of the detained journalists, and to ensure that they practice their journalistic work without any threat.

Accordingly, the Israeli authorities’ restrictions against journalists violate the rights and obligations stated in the Universal Declaration of Human Rights and the International Covenant on Civil and Political Rights that guarantee the right to freedom of opinion, expression and journalism. They violate the Fourth Geneva Convention, which affirmed that workers in the field of the press are “civilians” and they shall be completely free and protected when they exercise their duties without restriction or persecution.

Skyline concluded its statement by calling on all international parties, especially the Special Rapporteur on the situation of human rights in the Palestinian territories and the Special Rapporteur on the situation of freedom of opinion and expression, and all specialized agencies to exercise their functional and legal role and pressure the Israeli authorities to stop their systematic attacks against journalists working in the Palestinian territories. It further called on those bodies to coordinate with the Israeli authorities to ensure halting any attack on freedom of the press in all Palestinian territories, especially the areas of demonstrations.