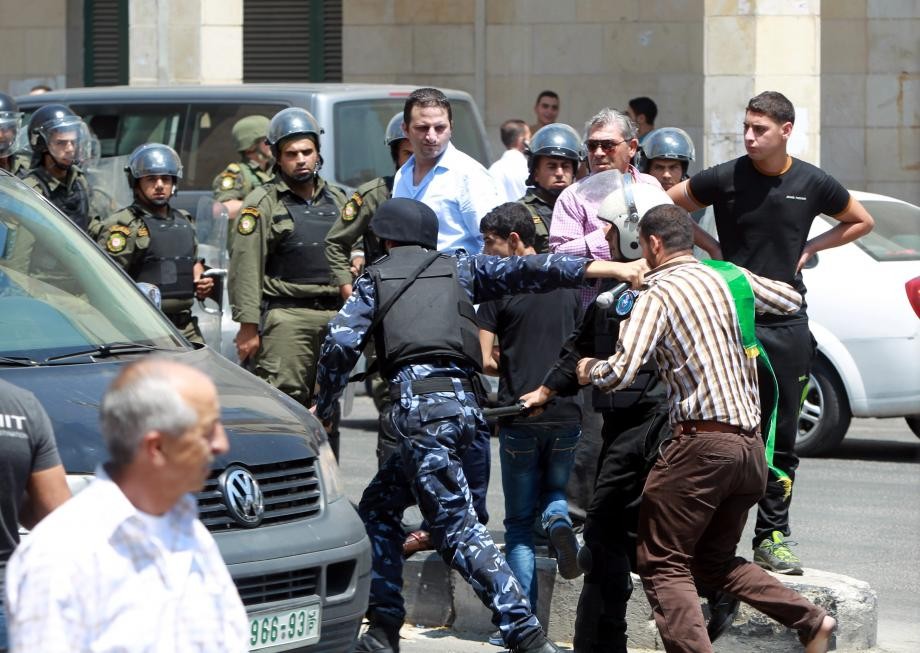 Skyline International for Human Rights has strongly condemned the escalating arrests and arbitrary detention by the Palestinian security services in the West Bank (PA). Detainees have been arrested for weeks and subjected to torture and abuse; others were not released despite the issuance of court decisions proving their release.

The Stockholm-based human rights foundation “Skyline” stated Wednesday that it has seriously followed up the arrest campaign by the Palestinian Intelligence and Preventative Security forces in the past days based on political affiliation or expression of opinion union work.

“Skyline” had received testimonies and complaints from the detainees’ families that the PA security forces raided houses and work offices, harassed residents, seized money and property. They also summoned citizens and keep them in custody without a legal basis.

Skyline’s investigation reveals that the Palestinian Authority (PA) has increased its political arrests in the occupied West Bank in recent weeks. This crackdown on Palestinian activists comes after Palestinians across the occupied territories, and Israel have protested against Israel’s planned eviction of residents of Sheikh Jarrah in occupied East Jerusalem and the Israeli bombardment of the besieged Gaza Strip. Some were arrested over their social media posts criticizing the PA performance during this period. In addition, others were prosecuted due to political activity advocating for the Future List, which represents the democratic reform movement.

According to Skyline’s monitoring, on Monday, June 22, 2021, the PA arrested activist “Issa Ismail Amr,” who was summoned by the police in Hebron due to a complaint filed by a legal person. The detainees also include the engineer “Mohammed Ismail Al-Wawi,” who was arrested by the intelligence service after being assaulted in front of the Halhoul Court in North Hebron, while he was waiting to receive his father, Ismail, 56, who has been detained for three days by the same agency.

“Skyline” received a complaint indicating that intelligence forces stormed Al-Wawi’s house in Halhul city, north of Hebron, harassing and intimidating the residents and seizing 20,000 shekels. The troops arrested Ismail Al-Wawi from his workplace in a ready-made concrete factory in Hebron. The intelligence spokesperson also denied that a sum of money was seized from the house.

On June 21, the Preventive Security Service arrested the freed prisoner “Taysir Jaber” after raiding his house in Tulkarm. He was previously arrested by the Palestinian security services and the Israeli army. The security forces also arrested the young man, “Jalal Abu Naba’a,” from Salfit on his return from Jordan yesterday evening, and he is a former political detainee. On June 19, the security services arrested the candidate from the Future List, “Majid Nazzal,” and transferred him to Jericho prison. They also arrested the leader, “Ghassan Abu Sneina,” from Hebron, based on declaring his support for the reform movement.

Since the suspension of the elections by the Palestinian President, “Skyline” has monitored several arrests and summonses of volunteers in the Future List, due to their activity in the electoral process and support of the reform movement. On June 13, 2021, the Preventive Security forces arrested Omar Hamdan, a student at Nirzeit Universi, then released him after two days of detention. On June 16, the Preventive Security summoned for interrogation the freed prisoner “Abbas Abu Alia.” On the same day, they arrested the engineer “Abdul Qader Shaheen” after raiding his house and confiscating a laptop and mobile phone. Also, the Preventive security forces summoned the young man Azain al-Hawari from Nablus and arrested the released prisoner, Tariq Aziz Aghrib.

The human rights foundation “Skyline” indicated that the security services had detained 22 citizens from Urif town in Nablus, tortured and abused them in Jericho prison. The security services claimed that they participated in burning a police headquarters during protests in the city on May 14. According to confirmed testimonies, the arrested were subjected to torture and physical beating. Also, their detention was extended several times, despite the lack of evidence proving the accusations against them.

Their families told “Skyline” team that some of them have been on an open hunger strike for several days in protest against their continued arbitrary detention and torture. It is noteworthy here that the Magistrate’s Court in Nablus issued several decisions acquitting some of the detainees, and so far, the security services have delayed their release.

Skyline stresses that the documented dangerous developments and restrictive practices, especially after the Palestinian elections canceled, flagrantly violate international law’s rules and the Palestinian Basic Law, which guarantees the right to freedom of opinion and expression, peaceful assembly, and political activities without the threat of prosecution.

The presidential decree issued on February 20, in preparation for elections that have since been postponed, reiterated the protection of freedom of expression in Palestine. What is happening in the West Bank now is an unfortunate result of the regression to the positive atmosphere that prevailed during the preparation period for the elections, and it is clear security forces have failed to abide by it. The ongoing arrests flagrantly violate this decree and the International and local law’s rules.

Finally, Skyline called on the Palestinian government to take urgent measures to release prisoners detained on political grounds or for expressing their opinions, stop relevant trials, ensure the cessation of security services’ abuse, investigate torture complaints, and hold those wrongdoers to account.