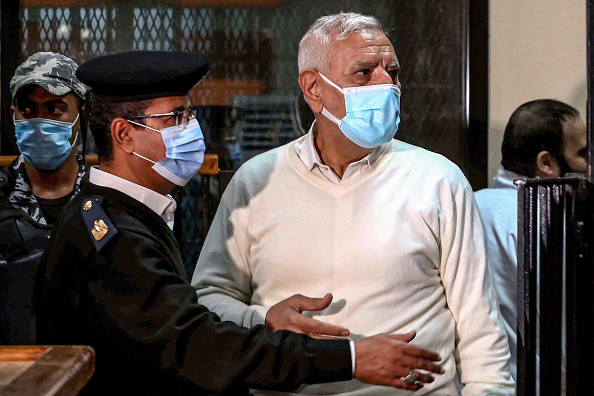 Stockholm- The international human rights foundation Skyline ccalls on Egyptian authorities to stop practices of "political retaltion " against detained activists and opposition figures, imposing prison sentences without fair trials and exceeding the legally established duration of pre-trial detention. It stresses that their continued detention violates both the rights enshrined in the Egyptian Constitution and the rules of international law.

In a statement released today, Monday, Skyline states that it is deeply concerned at the continued imposition of prison sentences on activists and political opponents, the most recent of which was yesterday, Sunday, by the Criminal Court for the State of Emergency in Egypt as punishment: Abdel-Moneim Aboul Fotouh, chairman of the Strong Egypt party, Muslim Brotherhood leader Mahmoud Ezzat, and 23 others were sentenced to 15 years in prison, while Mohamed Al-Qassas, the party's deputy chairman, was sentenced to 10 years in prison and 5 years probation, and Moaz Al-Sharqawi was sentenced to 5 years in prison, putting them on the terrorist list.

"Skyline" points out that the court based its decision on allegations related to "spreading false news harmful to the country's interests" and other charges, but dozens of human rights defenders considered that these charges "are political and based on unknown grounds,". They pointed out that the sentence issued yesterday came after the defendants had spent more than three and a half years in pre-trial detention, although the law stipulates that pre-trial detention should not exceed two years.

Skyline indiectaes that Egyptian authorities arrested "Abu Al-Fotouh" in February 2018 upon his return from London after he criticized the rule of current President "Abdel-Fattah Al-Sisi" in an interview with Al-Jazeera and called for a boycott of the elections to be held in March. In March 2018, the Prosecutor's Office decided to detain him as the State Security Case No. 440 of 2018 had not yet been completed, which was later made up and decided today.

While "Al-Qassas" was also detained in connection with another case since his arrest in February 2018, he was held for almost two years before being released, turned and detained in case 440 with "Abu Al-Fotouh", so the decision to expel them with the rest of the defendants in the case came in August 2021 and 3 months ago after the decision to end the emergency law.

For its part, Skyline stresses that what happened to "Abu al-Fotouh" and the other political opponents clearly violates the provisions of the Egyptian Constitution, especially Article 54, which guarantees personal freedom and the importance of its protection, and that the Egyptian prosecution violated the Criminal Procedure Code, which states that the pre-trial detention of individuals may not exceed two years in any case. Skyline further stresses that these practices also violate the rules of international law, in particular the Universal Declaration of Human Rights and the International Covenant on Civil and Political Rights.

Skyline concludes its statement by calling on the Egyptian authorities to immediately and unconditionally release all activists and political opponents, stop all violations of their fundamental rights, and work to allow people to live their normal lives without threat or persecution. It stresses the importance of international bodies, led by the United Nations and the European Parliament, putting pressure on the Egyptian authorities to stop their retaliatory measures and end the ongoing detention of opposition figures, political activists and human rights defenders.