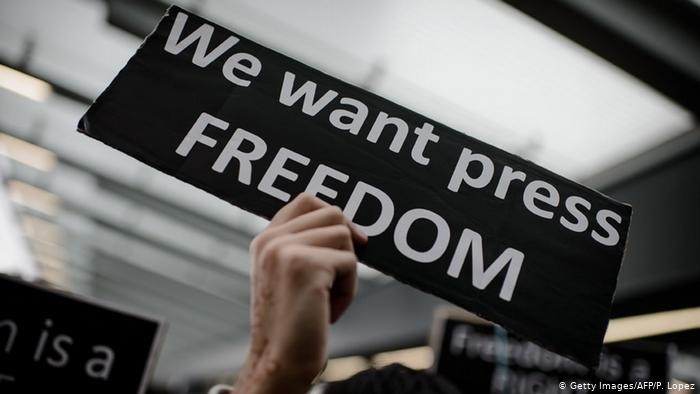 STOCKHOLM - The international Skyline Foundation denounces the arbitrary measures taken against Journalists by the Kurdish Self- Administration, which is led by the Syrian Democratic Forces (Qasd- SDF), in northeastern Syria in violation of freedom of the press.

The Stockholm-based international foundation condemns the Kurdish Autonomous Administration’s media office for barring Vivian Fatah, a correspondent for Iraqi Kurdistan-based media network, from reporting for two months after referring to fallen Syrian Democratic forces (SDF) fighters as having been "killed" rather than "martyred"

"Skyline" states that the decision represents a flagrant violation of international human rights law and the International Covenant on Civil and Political Rights on freedom of opinion and expression and international agreements governing freedom of the press and media work.

Skyline adds that that such measures are based on unjustified and contrary arguments to every real understanding of media work. Through these arbitrary measures, the Kurdish Autonomous Administration attempts to mix between political considerations and the editorial approach of media institutions.

"Skyline" indicates that the Kurdish Autonomous Administration had previously issued a another repressive order to bar two journalists from work on April 2 due to their media coverage on the Corona virus (Covid-19) pandemic. .

In this regard, Skyline points out that all parties to the conflict in Syria, notably the SDF forces, have been arbitrarily pressuring media workers. Thus, Syria is ranked first in the world by the number of journalist deaths in 2019, according to a report issued by the International Committee to Protect Journalists in November 17, 2019. Also, Syria is ranked 174 out of 180 for the second year in a row, according to the World Press Freedom Classification 2020, published by Reporters Without Borders.

Consequently, the International Skyline Foundation urges the UN Special Rapporteur on the promotion and protection of the right to freedom of opinion and expression to condemn the arbitrary restrictions taken by the SDF forces against the press and to stop violations of muzzling dissent voices.