Yemen: Skyline calls for bringing to justice those who shoot fire on protesters in Taiz 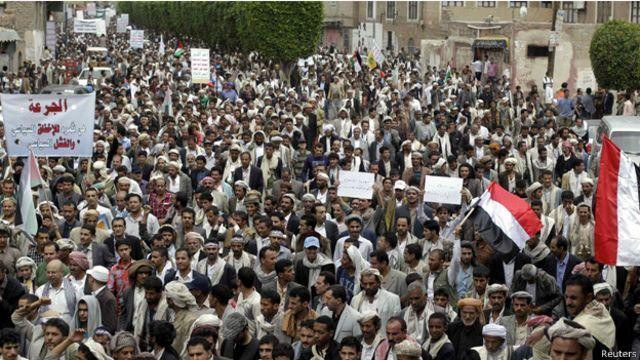 Stockholm - Skyline International Foundation for Human Rights holds the authorities fully responsible for fired shots in the air to disperse hundreds of protesters in Yemen's third-largest city of Taiz on Monday as unrest over poverty and deteriorating economic conditions, including crumbling currency, spread in areas held by the Saudi-backed government.

Sunday, Skyline states that the use of unjustified force against protesters is a condemned behavior, and flagrantly violates international law’s rules protecting the right to peaceful assembly. Thus, it stresses the need for the immediate and unconditional release of all individuals arrested in those protests.

Eyewitness said Several armed men, some of them in security personnel, shoot fire at the protesters, injuring one of them named, "Fathi Al-Arabi", 27 years old.

"Skyline" indicates that several security and military vehicles went out immediately after the protests began, and fired live bullets in order to disperse the protesters in several areas inside Taiz.  These attacks led to the injury of a protester and the arrest of dozens by Taiz’s security forces of the Taiz administration and the Taiz axis.

Skyline stresses that the shooting incidents against protesters are completely rejected as it constitutes serious and unacceptable violations of the rules of international law. It emphasizes that the local authority in Taiz is required to act effectively and deal positively with the legitimate demands of the protesters, which are guaranteed by international and Yemeni law alike, especially since these demands are among the basic rights that governments are obliged to provide.

In this regard, authorities in Taiz must open a serious investigation into the shooting incidents and arbitrary arrests, especially since these practices constitute a serious violation of international conventions that guarantee freedom of opinion and expression, peaceful assembly and the right to physical integrity. In addition, the authorities must bring security personnel who violate these rights must to justice.

Finally, Skyline concludes its statement by calling on the local authorities in Taiz to immediately release the protesters, work to provide them with medical services, start a comprehensive review of their policy used in managing the areas under their control, work to provide the basic requirements of individuals instead of prosecuting them for their basic demands