The U.S. President's disregard for" Shireen Abu Aqleh" and " Jamal Khashoggi" cases is disappointing, and the exchange of justice for political interests is shameful 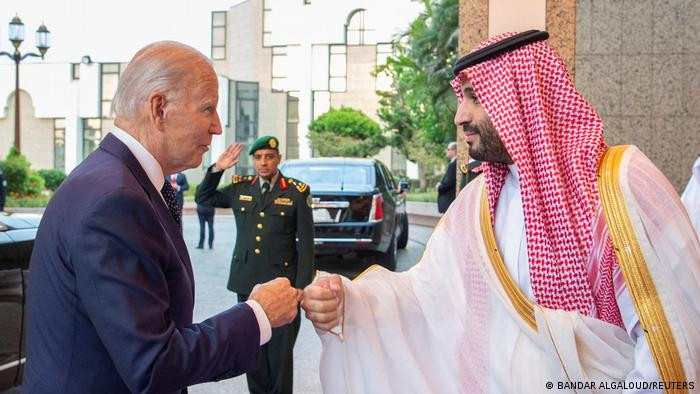 Stockholm- Skyline International for Human Rights calls on U.S. President Joe Biden and his administration to take serious action to ensure justice and accountability in the cases of killed journalists, and to work for the release of prisoners in countries he has visited in the Middle East in recent days.

In a statement released today, Saturday, Skyline regrets that U.S. President Joe Biden ignored the two cases of the murder of Palestinian journalist Sherine Abu Aqleh and Saudi journalist Jamal Khashoggi, as well as the presence of some 46 journalists in prisons in Israel and Saudi Arabia, which he visited.

Skyline indicates that the U.S. president arrived on July 13 for an official visit to Israel and the Palestinian territories, which came two months after the murder of journalist "Shirin Abu Aqleh," who was shot dead by the Israeli army in Jenin in the northern West Bank.

Skyline points out that "Biden" ignored the request of the Abu Aqleh family to meet him during his visit, confirming the attitude of his government, which was content to make loosely worded statements about her murder without launching a criminal investigation and fulfilling its duty to bring justice to the journalist, who holds American citizenship.

In this regard, Skyline highlights the disappointing results announced by the U.S. State Department on July 4, 2022, when it claimed that the U.S. side's investigation into the murder of journalist "Sherine Abu Aqleh" did not find out who was behind the crime after investigating the bullet fired at her.

It stresses that the Biden administration's stance on the murder of journalist "Abu Aqleh" is disappointing and mendacious, and reflects the official will to shield Israel from responsibility for a terrible crime and deny an American citizen her right to justice and redress.

Skyline points out that the U.S. president ignored the issue of the murder of journalist Abu Aqila during his visit to Israel. He also ignored the murder of Saudi journalist and writer Jamal Khashoggi, who was killed under gruesome circumstances in a consulate in 2018, during his July 15 visit to Saudi Arabia. His country is in Istanbul, where he worked as a journalist in Turkey, knowing that he regularly writes for the American daily The Washington Post.

Morever, "Biden" went back on his earlier promise during his election campaign to turn the kingdom into a "pariah" state against the backdrop of the horrific murder of "Khashoggi". He also met with Saudi Crown Prince "Mohammed bin Suleiman," who, according to U.S. intelligence reports, was suspected at the time of ordering the murder of journalist Khashoggi.

In addition, Skyline states that a few weeks after taking office as president, "Biden" decided to release a CIA report on the murder of "Jamal Khashoggi," a report that pointed to the involvement of "Mohammed bin Salman" in the crime. In the document, it appeared tha the Crown Prince of Saudi Arabia, Mohammed bin Salman, authorized an operation in Istanbul, Turkey, to arrest or kill Saudi journalist Jamal Khashoggi.

Skyline further says that Biden's statements after his meeting with the Saudi crown prince were insufficient and could be an instrument to forgive a terrible crime and encourage further crimes against journalists.

The human rights foundation Skyline expresses regret at the exchange of rights of justice and freedoms for political interests, as several sources indicate that Washington is trying to persuade Saudi Arabia - the largest exporter of crude oil in the world - to increase oil production to reduce high fuel prices against the backdrop of the war in Ukraine, in return for ignoring the positions of the Democrats from the case of the murder of "Khashoggi" in recent years.

Skylime indicates that Biden, who was accompanied by hundreds of journalists, ignored the presence of 16 journalists imprisoned in Israel and 28 others in Saudi Arabia.

Skyline concludes its statement by pointing out the need not to trade fundamental rights for political reconciliation and ccalls on the Biden administration to correct its positions and support the launching of an international investigation that guarantees justice for journalist "Abu Akleh", as well as to take effective measures to ensure that there is no impunity in her case and in the case of Saudi writer "Jamal Khashoggi." .