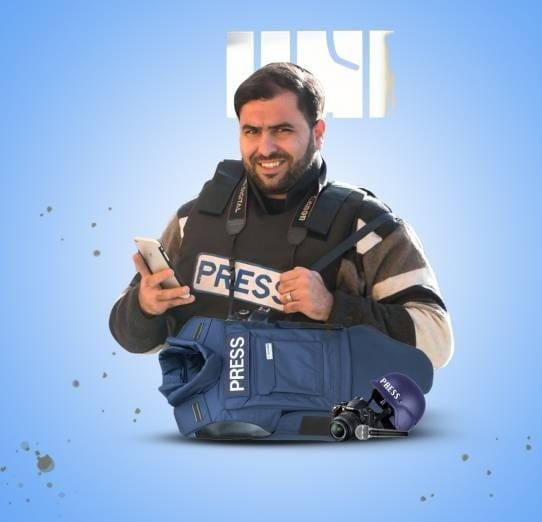 In a statement released today, Tuesday, Skyline says that Israeli forces stormed the house of journalist "Amer Abu Arafa", reporter for Shehab News Agency, at 3 a.m. today (19 July) and arrested him after searching the house and terrorizing the residents.

"Skyline" points out that this is not the first time that journalist "Abu Arafa" has been arrested for his journalistic work. He has already been arrested several times by the Israeli army and the Palestinian security services.

The human rights foundation states that the arrest of "Abu Arafa" is a continuation of the Israeli army's policy of arresting journalists and obstructing their work. It indicates that about a month ago, the Israeli forces arrested journalist "Musab Qafisha", who works for Alam Radio and is a reporter for some local agencies and websites, after they also searched his house in Hebron city.

Skyline confirms that with the arrest of journalist "Abu Arafa", the number of Palestinian journalists detained in Israeli prisons has increased to 18, some of whom are serving prison sentences and the rest are in administrative detention. This detention is considered illegal because the arrests are not based on public charges, but are arbitrary under the pretext that a secret file exists.

Skyline also notes the high number of Israeli violations of press freedom in the first half of this year, which amounted to more than (412) violations, according to the Journalists' Support Committee. These violations culminated with the murder of Palestinian journalist "Shirin Abu Aqleh" on May 11 of this year while she was covering a raid by Israeli forces in Jenin; her colleague "Ali Smoudi," who was accompanying her, was also injured.

For its part, Skyline International expresses its deep concern over the escalation of the Israeli army's abuses against Palestinian journalists and stresses that the Israeli policy of imprisoning, persecuting and restricting the freedom of work of journalists is a serious violation of numerous international conventions guaranteeing the special protection of journalists.

At the end of its statement, Skyline calls on the international community to move and play a more effective role in this regard. It also calls on the relevant mechanisms of the United Nations to take more serious measures to end the systematic Israeli violations against journalists and media freedom in Palestine, and to ensure that journalists can work without persecution or intimidation.